A plant called Camellia Sinensis produces the leaves and buds that are commonly known as tea – the most common beverage consumed in the world, second only to water.

Camellia Sinensis, which grows in tropical and subtropical climates, is a flowering evergreen shrub that produces small white flowers; the leaves and buds are ready to be harvested three years after the shrub is planted. Although Camellia sinensis bushes can live for more than a hundred years, harvesting leaves and buds from smaller, younger bushes is easier. Once harvested, the leaves are dried and rolled in preparation for distribution.

The traditional tea-growing countries are China, Japan, India, and Sri Lanka. However, in recent years, new tea-producing countries have emerged, most notably Bangladesh, Vietnam, and Kenya. Origin impacts the flavor characteristics while altitude, soil type, plant type and age of the tea plant are other influencing factors.

Each origin can produce any of the five types of tea, although certain regions are known for one type or another. For example, Japan is known for green tea. China is known for white tea and pu-erh tea and Sri Lanka for its black tea.

Whether you choose organic green tea, white tea or black tea, it’s important to learn where your tea is grown, as well as how it's harvested and distributed, to ensure the highest standards in ethics, quality and taste.

Teatulia offers the promise of those ideals, packed in earth-friendly packaging and shipped with the idea of freshness and rich taste at the forefront of Teatulia's philosophy.

The differences between the five types of tea come from how they are processed: 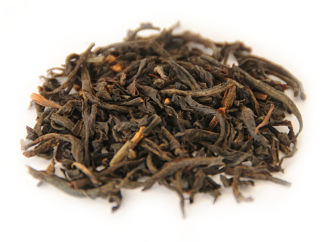 Processing to create a black tea involves full oxidation (or fermentation) of the tea leaves. After the leaves are plucked, they are then laid out to wither for about 8 to 24 hours. This lets most of the water evaporate. Then the leaves are rolled in order to crack up the surface so that oxygen will react with the enzymes and begin the oxidation process. The leaves are left to completely oxidize, thus turning the leaves to a deep black color. After that, a final drying takes place. Black tea is generally stronger in flavor than its green and white counterparts and will also maintain its flavor for several years. 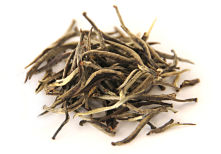 This tea starts with just the tightly rolled buds of the plant. White tea does not go through any oxidation at all. In order to prevent oxidation, white teas are immediately fired or steamed after letting them wither (air dry) for a period of time. There is no rolling, breaking, or bruising of any kind. White Tea is derived from the first flush* buds of the tea bush. The name refers to the silver-colored (white) hairs on the picked tea bud. White tea is the least processed of all teas. It isn’t rolled first but is immediately fired so there is no withering or fermentation/oxidation. Availability is limited and the cost high as a result of the limitations of the plucking standard. The liquor of White Tea is very pale yellow in color, and mild tasting in the cup. White tea should be prepared using water that is just off the boil. *The new growth on a tea plant consisting of a full complement of leaves. It takes about 40 days for a new bud to blossom into a flush.

Oolong leaves are processed immediately after they are plucked. Typically, the tea leaves are first laid out in the sun to dry and then placed into baskets and shaken, which “bruises” the leaves. The leaves are then spread out again under the sun to begin a partial oxidation process, however, the process is halted after two hours or so the leaves may be fired in hot woks. Ultimately, an Oolong will have crisp, dry leaves and rich dark color.

What sets the processing of green tea apart from the rest is that it does not involve oxidation. In order to neutralize enzymes and prevent oxidation, the Camellia sinensis tea leaves are typically steamed or pan-fried. Next, the leaves are rolled up in various ways and tightness. After that, a final drying takes place. Since no oxidation takes place, the tea keeps more of its original green leafy appearance.

This tea has been fermented and typically aged for decades. It is often purchased in cakes or disks and is regarded and one of the highest quality teas on the market.

Epigallocatechin Gallate (EGCG) is a powerful antioxidant. It is important to note that EGCG is found only in green teas. Additionally, overheating your green tea during steeping could result in degradation of this compound.

Teas can be classified by a number of distinctions, like the region in which it is grown. For example, Darjeeling is the province of India where this particular tea grows. Sometimes the style of tea determines the characteristics of its leaves, like Japanese Sencha.

Teatulia's teas are USDA certified organic, fresh and flavorful. Grown in a single garden in northern Bangladesh, we offer you the best tea that Mother Nature can provide. From organic black tea to green, white and herbal teas, Teatulia makes teas that nourish the body as well as the mind and the soul.